In 2009 I was scouring the internet for hope. I knew was attracted to men, but what worried me more was that I was not attracted to women. My search led me to the website for Exodus International, a non-profit Christian network that provided assistance to those with concerns of unwanted homosexual attraction. The URL at the time was exodusinternational.org, but you won’t find it there anymore. In fact, the only place you’ll find it now is on archive.org’s Wayback Machine. This is what it looked like back in 2009: 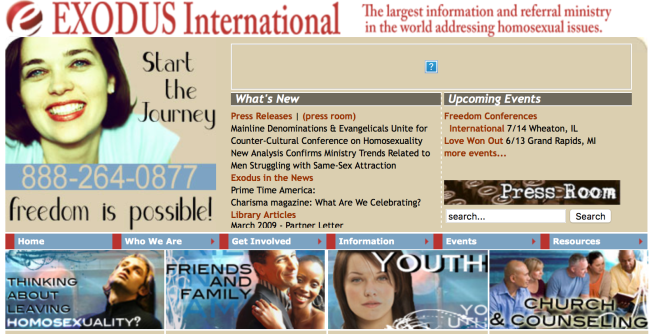 I read story after story of people who had been sexually active with members of their own sex, sometimes behind the back of a spouse of the opposite sex. Through Exodus International, they found hope. They learned that their life could change and they could overcome their inappropriate desires. I didn’t necessarily connect with the specific details of all their life paths, but I understood the struggle and sought the same hope. The website also provided a list of book recommendations. I ordered one of the books from the list, Growth into Manhood: Resuming the Journey by Alan Medinger. When it arrived, I inhaled it like fresh air. It all made sense. I finally understood how I had developed my feelings, and I saw a path for change.

The president of Exodus International at the time was Alan Chambers. He is a gay man married to a woman named Leslie. I didn’t know it at the time, but behind the scenes Alan was going through his own transformation process.

Alan was born in 1971 when things were different. In 1991 he joined an organization called Eleutheros, an early Christian ministry for people with same-sex attraction.  He attended his first Exodus International Conference in 1993 and joined their summer conference leadership team in 1995.

He met Leslie Paull, they fell in love, and they were married in 1998. As it happened, he was not the first gay man she had dated. She knew he was gay (or at least “ex-gay”) from the moment they met, and it did not concern her. After marrying, their sexual relationship was rocky at first but over time, as they became more comfortable with each other, it improved. These days if you ask Alan what his sexual orientation is, he is likely to respond, “Leslie.”

Given his experience, he felt drawn to encourage others to seek a similar outcome. In 2001 he became the president of Exodus International. In that position, he hosted and spoke at the organization’s conferences and represented it in interviews with the media. His message was one of hope, faith, and opportunity.

As he interacted with the membership of the Exodus network, he began to see a new perspective. He was faced with stories of people who had trusted his advice and tried to form heterosexual relationships but had failed miserably. He began to realize how rare his story was. It became clear to him that the message of Exodus International was unfair and unrealistic for most of the audience it was intended for, and it was hurting too many people.

That realization led to a transformation within Exodus. The message of change faded away and it was replaced with a message of grace. As the rhetoric softened, membership decreased. Eventually, with the organization preparing to close, Alan felt the need to apologize for the harm it had unintentionally caused to so many. He released a public apology on 20 June 2013. You can read it in full here. This is an excerpt:

Please know that I am deeply sorry. I am sorry for the pain and hurt many of you have experienced. I am sorry that some of you spent years working through the shame and guilt you felt when your attractions didn’t change. I am sorry we promoted sexual orientation change efforts and reparative theories about sexual orientation that stigmatized parents. I am sorry that there were times I didn’t stand up to people publicly “on my side” who called you names like sodomite—or worse. I am sorry that I, knowing some of you so well, failed to share publicly that the gay and lesbian people I know were every bit as capable of being amazing parents as the straight people that I know. I am sorry that when I celebrated a person coming to Christ and surrendering their sexuality to Him that I callously celebrated the end of relationships that broke your heart. I am sorry that I have communicated that you and your families are less than me and mine.

More than anything, I am sorry that so many have interpreted this religious rejection by Christians as God’s rejection.  I am profoundly sorry that many have walked away from their faith and that some have chosen to end their lives. For the rest of my life I will proclaim nothing but the whole truth of the Gospel, one of grace, mercy and open invitation to all to enter into an inseverable relationship with almighty God.

Back to My Story

On 20 June 2013, I was reading through the news and I noticed a familiar name in the headline: Alan Chambers of Exodus International. As I read through the apology, my eyes did not leave the screen. I was filled with emotion. This was the message I had been waiting for.

Since I first discovered Exodus International in 2009, I had exhausted huge quantities of emotion, thought, energy, and time in an effort to change. In all honesty, I’m glad I did. I learned some hard but valuable lessons during those years, and I developed greater strength of character, patience, and empathy. But my orientation did not change. It didn’t even budge. I was gradually letting go of my sincere but naive youthful expectations, but letting go was hard to do.

I had decided at some point that I would benefit from therapy. Like many people, I had developed some unhealthy thought processes that I wanted help sorting out. What I did not know is what I wanted to do about my sexual orientation. Would I continue trying to change? I felt I could not seek out therapy until that question was decided.

I clearly remember reading Alan’s apology and feeling an internal “settling.” It was as if all the question marks flying around in my head and heart had converted into periods. I was calm. This was right. I had decided. It was not long before I confidently began therapy, knowing what I wanted and what I did not. I don’t often have moments of such clarity. Most of the time I feel pretty muddled up. But what I experienced as I read Alan’s apology felt, as much as anything I have known, like “pure intelligence flowing into” me.

Most of the details I provided about Alan’s life are taken from his and Leslie’s recent book, My Exodus: From Fear to Grace. It is a wonderful read, and I highly recommend it to anyone interested in better understanding his story and perspective.

One thought on “Spotlight: Alan Chambers”