After the mob of school children passed my house on their way home I saw a little girl walking in the opposite direction, crying. I went out, as a mother would, and asked if she was okay. She had lost her little brother, who she usually helps get home from school. I asked if she wanted to call her mother and she said, “No, she’s working, she won’t know where he is.”

She was beyond distressed, and began to run down the sidewalk calling out his name. I was a stranger, and she wasn’t going to engage me. When I returned home I gathered my little children around and told them her story, and we said a prayer for her and her little brother.

I couldn’t get her out of my mind, and the fear and helplessness she must be feeling. She was so tiny in the world. Even though she had rejected my efforts, I knew I needed to show up as a safe adult and help.

She had made it quite far toward the school when I finally caught up with her. She looked back and saw me tailing her and began to run, and I could tell she was afraid. I called out and she finally stopped so I could catch up. I knelt down, told her my name and that I was a mother, that I knew I was a stranger to her, but that I had an idea about how to help her.

Together we walked to the school, and I told her I understood how afraid she must be feeling. She downloaded all her fears about what might be happening to her brother. I explained that we would go to the school and tell the adults there what had happened, and they would know what to do, and how to help her. She became visibly relieved.

We made it to the school and she was taken in by people she knew were safe and would help her. I cried on the way home thinking about how vulnerable that innocence is in this hard, raw world. I remember moments as a vulnerable child when I wasn’t spared from the distress and fear I saw in her.

I’ve felt so grateful, in our vast ocean of suffering, for that opportunity to sooth one small drop of pain, inside one tiny heart. Love works on the principle of the Butterfly Effect–the impossibly tiny, fragile movements of love can cause hurricanes of change. 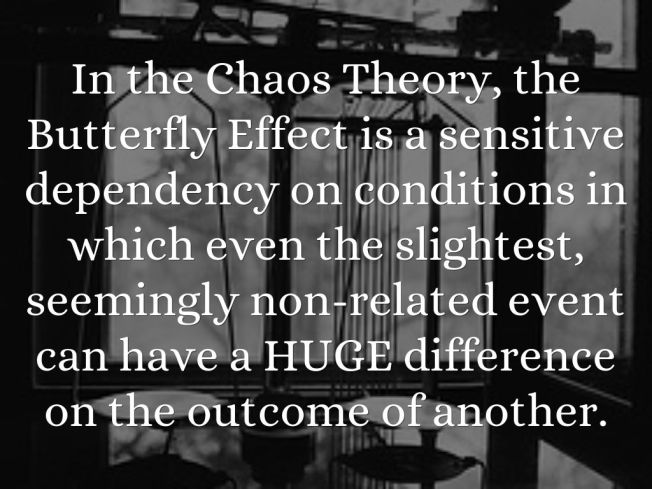 2 thoughts on “A Little Girl, Love, and the Butterfly Effect”