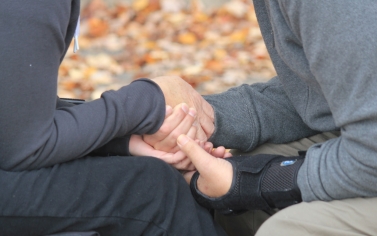 I’ve been contemplating recently what it means to be a hero. As usual I’m trying to figure out what to make of myself, but in particular I’ve just finished reading The Denial of Death by Ernest Becker. In his book, Becker argues that the overriding fear of every person is death, and that we try to fight off that fear by being heroic. Religions, he says, are hero-systems. They teach us how to matter.

During her recent redemptory NYE performance, Mariah Carey dedicated the song Hero to “everyone that speaks out for justice and tries to make the world a better place, a more united planet,” calling them “the true heroes” (don’t go and watch the video just yet. I’ll give you a link in a sec). And I’m with Mariah.

I lean progressive so my inclination is to fix what is wrong. To me, Fixers are heroes. I love reformers, revolutionaries, civil rights leaders, suffragists, abuse survivors, and gay Mormons who stand up and speak out and represent. There is so much wrong to make right.

I’ve also learned that if we glorify only Fixers, we miss another category of heroes: Keepers. Keepers are the ones who keep things going. They make the world safe and predictable by showing up the same time every day. Lots of gay Mormons are this kind of hero, but you’ll never hear about them online. They don’t feel called to fix society or the church. Deep down they’re just trying to make their way in the world and let everyone else do the same. Their courage is in being there for their friends, families, partners, students, and coworkers even when it’s hard. They fight enemies like boredom, fear, laziness, insecurity, and hurt feelings.

Dieter Uchtford once told a story about a heroic couple, a husband who “did not allow […] disrespect to make him angry or upset” and a wife who “lovingly remembers birthdays and anniversaries,” to illustrate that “some of the greatest souls who have ever lived are those who will never appear in the chronicles of history.” People who are kind, patient, loyal and reliable are there for us to keep our lives from falling apart. They are our Keepers. The world needs more Keepers.

The gay Mormon world is full of Keepers: gay children who forgive their parents for hurtful comments they once spoke in ignorance, gay parents who adopt and help their children get dressed for school every morning, gay people who step away from the church quietly to give space for their friends and family to continue attending, mixed-orientation couples who continue supporting each other and their children after coming out, and gay couples who stick together long enough to work through decades of internalized homophobia.

There is more than one way to save the world, and one way is by holding it together. You don’t have to make the news or speak in public or write a blog post to be a hero. Just be true to yourself and to those you love. Showing up every day is heroic.

Now on to Mariah: https://youtu.be/C4cQHlL5Mz0?t=2m47s (starts just before her dedication and just after realizing there was no hot tea in sight).